“pleased to meet you, hope you guess my name…” the new Doctor Who novel: Scratchman by Tom Baker and James Goss (2019)

This Doctor Who novel was a long time in coming. It began life as a joint  script dreamt up by Tom Baker and his co-star,  the late Ian Marter (who played Unite medic Harry  Sullivan in  Doctor Who between 1974 and 1975).    A good deal of the original story seems to have been  worked on between rounds  in their favourite London pubs or the Colony Club. Giving  it the name   name Doctor Who Meets Scratchman the two actors got as far as talking to director James Hill about a possible film,  but it never progressed any further.

Flash forward forty odd years and the project has been  revived and turned into a novel  in a collaboration between Tom and the very  experienced writer James Goss,  whose previous Doctor Who work  has included  the novels City of Death (2015), The Pirate Planet (2017) and  Doctor Who and the Krikkitmen (2018). In an interview in Doctor  Who Magazine (534)  James says:

At the start of the project I sat down with Tom and a storyline… Although a script of Scratchman exists, there were a  few hints that  it wasn’t quite what Tom and Ian had originally envisaged. So we went right back to the original story and built it up from there.  ..Tom was very influential in shaping the story.

Scratchman features The Fourth Doctor, Sarah Jane Smith and Harry Sullivan. The story is told in a series of flasbacks by the Doctor himself who has been hauled up in front of an assembly of Time Lords with the snappy  title of the Convocation of Oblivion. They’re not happy. 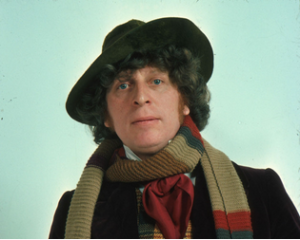 Your recent actions endangered the enture universe,” the Zero Nun informed me.

The crowd seethed. There was hunger to them….

“All right,” I told her. “But in order to do that I need to teach you about the fear”.

“Fear?” she blinked. That got her.

“Yes.” I addressed the  entire chamber. “You see, even the Time Lords are afarid of something . And tonight, I’m going show you what it is. Are you sitting  comfortably? Of course you are. And  I’m  rather afraid that’s the problem…” 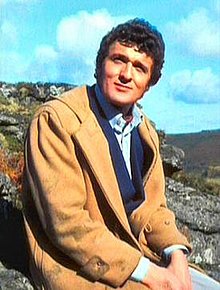 The novel opens  with the Doctor and his companions landing on a  remote Scottish island. (Science fiction and Scottish islands seems to  naturally go together, one thinks  of Target Luna, The Andromeda Breakthrough, Orbit One Zero,  Aliens in the Mind etc).

A peculiar breeze drifted through the fading daylight on the island. The strange wind howled around the field, circling like a cat before settling down.

A sheep observed all this curiously. Confirming her worst suspicions, a large blue box pushed its way out of thin air onto the grass. The ewe shook her head sadly and trotted away.

The island is picturesque,  but the Doctor senses something in the air. He’s right, of course. They  soon discover that the scarecrows on the island are mutated villagers. They are alive (sort of)  –   and  malevolent,  and it’s not long before the Doctor and the remaining  villagers are barricaded  in the local church in a  classic “base under siege” scenario with the scarecrows hammering on the doors. (The Doctor comes up  with a collective noun for scarecrows, by the way  “a scratch”)

The Doctor manages to get them out of this,   but this is just the begining of their troubles. If the first half is gothic in feel, the second half draws on classic Greek tales, particularly The Odyssey.

The Doctor, having been separated from Sarah and Harry, finds himself in a mythological place. If I tell you that he’s driven there by Charon (in a London taxi) you’ll probably guess where he is (or appears to be, for nothing is straightforward and nothing is what it seems). Can the Doctor free himself and rescue his companions?

Between them Tom and James have successfully evoked a particular era of Doctor Who without it being a pastiche and I  personally enjoyed it a great deal, particularly some of the phrases in the novel. Here are a few of my favourites;

“I love a good barricade, it reminds me of the Siege of Leningrad”.

“That”,  I said very  gravely, “is a bag of jelly babies”. I took the sweets  from Harry’s hand and offered them around. No takers.

I took refuge in the canapes, successfully helping myself to a vol-au-vent. It’s quite something when  only the profiteroles believe in you.