If the Victorians had had computers: The Difference Engine by William Gibson and Bruce Sterling (1990) 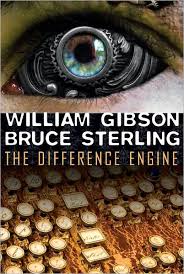 Set mostly in 1855, The Difference Engine imagines what might have happened if Charles Babbage had succeeded in creating a workable computer in the 1820s, which he called “The Difference Engine“. It’s part of  a  genre of science fiction which has become known as “Alternative History”: short stories and novels whose plots hinge on  history going down a different route at some cucial point.

My favourites in this genre include  Pavane by Keith Roberts , the Time Patrol  series by Poul Anderson and The Clockwork Century series by Cherie Priest. Inevitably there is a website devoted to this genre,called  Uchronia. Some of the novels mentioned on this  site look intriguing, but many of them look deathly dull.  Just how many novels in which the South won  the American Civil War does the world need?

In this England  the “Rads”, the Industrial  Radical Party  of industrialists and scientists, backed by the working class, seized power in a revolution in the  early 1830s, overthrowing  the aristocracy and killing the Prime Minister, the Duke of   Wellington. Now Lord Byron is  Prime Minister, while his daughter  Ada  (who in our timeline did indeed  work with   Babbage on his computing ideas)  is known as “The Queen of Engines”.  The “Rads” use the  Engines to enhance their  wealth and power,  and also to closely  monitor its citizens.   Dissent is crushed.

The United States, whose affairs play a minor role in the story, has split into four countries with a northern state, a Confederacy,  and an independent California and Texas. Lord Engels is a cotton magnate in Manchester, while Karl Marx is the leader of a Communist Commune in Manhatten.

The main character is Edward Mallory, a scientist and explorer, who embarks  on a journey across London in pursuit  of  a set of computer cards stolen from Ada Byron. He is aided by his brothers,  and  Fraser,  a secret policeman. They run up against a secret organisation led by “Captain Swing” which is planning a revolution  against the “Rads”. The journey shows vividly  that that in this society there is still rich and poor, greed, corruption and violence. A minor part is played by Sybil Gerrard, daughter of a Manchester Chartist (executed by the Rads twenty years before), who has come into possession of the cards. 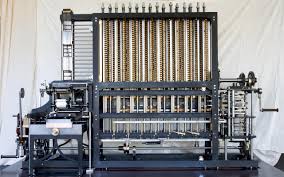 This is  a description of the Engines, whose operators are known as “clackers”:

Behind the glass loomed a vast hall of towering Engines – so many that  at first  Mallory thought the walls  must surely  be lined with mirrors, like a fancy ballroom. It was like some carnival deception, meant  to trick the eye – the giant  identical Engines, clock-like constructions of intricately interlocking brass, big as rail cars set on end, each on its foot-thick padded blocks. The whitewasheed ceiling, thirty foot overhead, was alive with spinning pulley-belts, the lesser gears drawing power from tremendous spoked flywheels on socketed iron columns.White- coated clackers, dwarfed by their machines, paced the spotless aisles. Their hair was swaddled in wrinkled white berets, their mouths and noses hidden behind white gauze.

For me the strength of  the novel lies in portrayal of this alternative London, familar yet alien.  The most interesting character is Sybil  but, disappointingly,   after encountering her at the start of the novel working as a prostitute and becoming involved in the hunt for the cards, she flees  to France after her paramour is murdered, and we only meet her again at the end, now wealthy and established, when she  attends a lecture given by Ada. The male characters are far less interesting, do not change,  and the novel runs out of steam, so to speak, after the defeat of Swing.

The novel ends in 1991 in a glittering crystal future London as , it seems,  an Engine achieves self-consciousness :

Dying to be born.

The light is strong,

The light is clear;

the Eye at last must see itself