Out of the Unknown Series 1; episode 7 “Sucker Bait” by Isaac Asimov 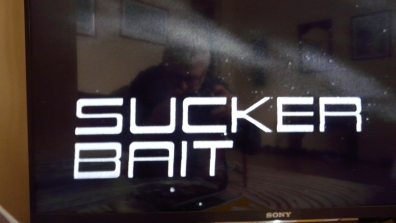 “Sucker Bait” was a novella  first serialised in the February and March 1954 issues of Astounding Science Fiction, and reprinted in the 1955 collection The Martian Way and Other Stories.

The story begins on  the bridge of a spaceship in flight with countless stars visible.  (All stories like this seem to begin on  the bridge). We are in some undated future where there is a Confederation of 83,000 worlds.  Men still wear polo-necks, though, but  at least they  have the escaped the uniform blond hair of previous episodes.  The crew is multi-racial, but there are no women  on board.

Captain  Follenbee summons a crew member,  Mark Annuncio, to see him. Whilst the rest of the crew are scientists, laughing and joking   as they go about their various tasks,  Annuncio in these opening scenes  is  established as  an outsider,  who is regarded with  suspicion by the other men.   Novee comments, You’ve got to remember he’s a mnemonic, a weird and special lot. 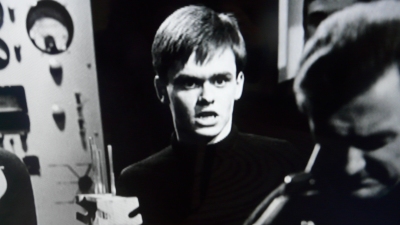 Annuncio gets into an argument with the Captain when he refuses to let him see the ship’s log.  He  is rescued by  Doctor Sheffield who explains  who he   is, ostensibly  for the Captain’s benefit , but really  for our benefit what  a mnemonic does (mnemonic derives from the Greek word meaning memory).

…Computers are limited, they have to be asked questions. Sometimes it never occurs to people to ask them the right questions. Therefore mankind needs a  computer that is non-mechanical, that has some imagination. There is such a computer… in each and every one of us…Somewhere inside the human  brain is a record of every fact that’s ever been impinged upon. Very little is consciously remembered,, but it’s all there. A slight association can bring it back to us without knowing where it came from or why. Now that is called “a hunch”  or “a feeling”… Now some people  are better at it than other. Others are almost perfect,  like Mark Annuncio.

So we train them to read, look, listen and do it better and more efficiently. It doesn’t really matter what data they collect. Any data may be useful, and every in  no machine could possibly make.once in a while a mnemonic makes a correlation…You see Mark is different from us… mnemonics are taken into the service about the the age of five. In a sens etheya re force-grown. We allow them no contact  with normal people in case they develop normal  mental habits.  They are highly strung, easily upset, and  easily ruined. I am here to see that does not happen. mark is an instrumnet, the most valuable instrument on this ship. There are only a hundred like him in the universe.

When he  is annoyed (which happens quite often)  Annuncio   refers to the other crew members  as “Non Compos” which Doctor Sheffield explains means “Non Compos Mentis” ie “not of sound mind.”

The ship is heading for a planet  called Troas  which Mark has identifiied as a planet  where a colony was established, but then the colonists all died. Their mission is to find out why.  When the ship arives an expedition  – which includes Mark and Doctor Sheffield _  is sent to the  rocky surface. They find no sign of the colonists, just burial  mounds.   Increasingly the crew feel uneasy. Fawkes   wakes  from a dream believing that there was someone in the tent: They’re  all around us. Intelligent beings out there now. I’m telling you, I saw  in the tent and out here. Novee tries to convince him that it was just a nightmare.  but Fawkes is convinced that there is intelligent life on the planet.

However it is Annunncio who  realises  the real  truth of why the colonists died and takes drastic action that saves their lives. He pieces together  a number of  different   facts to reveal that  they were poisoned by beryllium, an element  that humanity has forgotten about,    but about which  he once read an obscure paper. Data matters, it seems .

My view is that  not a  great deal of drama in this story,  while the issue as to whether it is  morally right to create mnemonics is not touched on.

Posted in 1960s, Isaac Asimov, Out of the Unknown and tagged Naomi Capon. Bookmark the permalink. 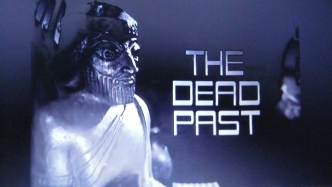 Isaac Asimov (1920-1992) was probably the  most  influential  science fiction writer of the  1950s and 1960s  through works such as the Foundation trilogy and his robot stories. This was not the first of his stories to  be produced on British  television. Irene Shubik had produced “Little Lost Robot” as part of the Out of This World series on ATV in 1962  which was one  of his robot stories. (A copy of this  has survived).  Following her move to the BBC with Sidney Newman,  Irene followed this with a production of The Caves of Steel, one  of Asimov’s robot novels, broadcast on  5 June 1964 as part of the Story Parade series.   I  have a vague recollection of watching this, aged nearly 9. Sadly only a fragment has survived which  you can watch here.

“The Dead Past”  was first  published in Astounding Science Fiction in April 1956. It  is a time travel story with twist, set in some undated future and  begins  with Caroline Potterley having a nightmare in which she hears an unseen young girl screaming whilst  flames rise. Awakening in distress  she cries  for her husband Arnold,  and then goes into the living room  where she approaches  a small statue of a god or king. 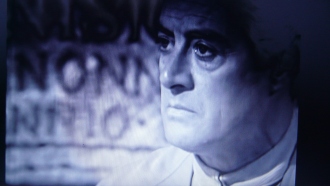 In the next scene we see Arnold Potterley  having a meeting with Thaddeus  Araman, who  is “the top man in Chronoscopy”.  Chronoscopy,  we learn, is a science that enables the past to be seen through a machine. Potterley is an historian who specialises in the study of Cathage (a powerful city state on  the coast of what is now Tunisia which was destroyed by the Romans in 146 BC after a series of wars). I can’t help thinking that, unintentionally or otherwise,  Potterley looks a great  deal like the historian A J P Taylor, well-known in the 1960s for his history lectures on television.

Potterley has come to Araman because for two years he has been  trying to get permission  to  carry out  research on Carthage,  using  time-viewing to examine the landing of Scopio Africanus  in 202 BC.  Araman fobs him off with series of technical excuses and,  in addition,  says that there is long waiting line. As Potterley leaves disappointed Araman  warns him,  “You won’t try and get help anywhere else will you? The Department of Physics,  for instance? I am sure I don’t have to warn you that if you did, you would be considered guilty of  intellectual  anarchy  and your basic grant would be instantly withdrawn.”

After Potterley has gone Araman confers with  his secretary (and perhaps lover) , Miss Clements, “I am always fascinated  to know what they think when  they leave this office. Do they really believe what they are told?” She replies, “You know what they do, they go home, stamp their feet , say unkind things about  you and wait for their wives to bring them to their senses.”   He ponders further, “Would you say that he is a threat to us? Determined? Cunning?…We are going to have a little fun with Professor Potterley.” 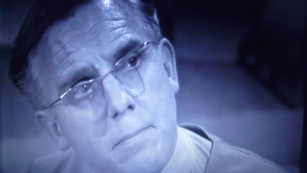 Undeterred,  Potterley  approaches Jonas Foster, a  physics lecturer,  and asks for his help with chronoscopy.  Foster initially turns him down, saying that he knows nothing of neutrinics, the science  that led to the discover of chronoscopy by Sterbinski some 50 years earlier.  (Neutrinics was made by Asimov). In this society  it seems, research outside one’s field of study  is discouraged, is in fact  labelled “intellectual anarchy”. Foster says , ” It was different a hundred years ago, some marvellous discoveries were made.by sheer accident. But as we  got more data and more knowledge so we had to specialise…and now every branch of   of science is geared to the public’s  needs.” Potterley responds, “You speak like a computer. Official  propaganda every word…I say the government  is actively suppressing research in neutrinics and chronoscopy.” 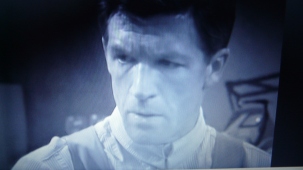 Potterley has successfully  lit a the flame of curiousity in Foster. When  he vists the Potterleys for dinner,  Caroline discloses that  their daughte Laurel  died in a fire at the age of 10, while the statue in Arnold’s study is revealed to be that of the  god Moloch to whom the Cartathaginans allegedly  offered human sacrifices. Foster eventually  agrees to build a  chronoscopy machine,  using  research information unearthed by his uncle, Ralph Nimmo,  a science  journalist, played splendidly by Willoughby Goddard with an eye-patch (not part of his character,  but  worn due to an eye infection, apparently). Potterley  tells  his worried  wife,  “It’s Carthage that counts and human knowledge, not you and I.” But their activites have not gone unnoticed. Araman, it seems,  somehow  knows what is going on.  Miss Clements challenges  him,“What happens if they learn the truth? What will we do with them then?”

The Chronoscope is built in the Potterley’s cellar. But there is bitter  disappointment  for Potterley when Foster tells  him, “You will never see Carthage…When the field is interpreted you get random factors, it’s the same with all sub-atomic particles, random factors which  produce a kind  of fuzziness…the further back in time you go, the greater the fuzziness..until finally the picture is drowned.  You can only time view so far back, a century and a quarter at the most…No historian

has ever used the chronoscope, they couldn’t. The government has been having us on, it’s a hoax.” 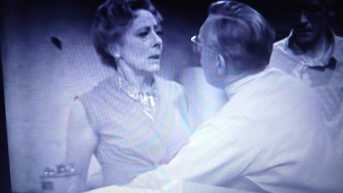 Caroline  interrupts  the two men in the cellar, having realised what the machine could offer her.  “Listen to me.  Even if it only goes back twenty years, we could see Laurel . What does it matter about Carthage, its’s Laurel Arnold, she’ll be alive for us again..” Distarught,  Potterley begs her, “Caroline, please, what will you see? Do you want to live those years over and over again? Watching a child who will never grow up? You’ll go mad. Is that want you want? Is it?  “I want my child“, she cries in response, “she’s there in that machine. I want  to see her, I want my baby.  In rage or despair  or guilt, Potterley smashes the machine beyond repair.

But this is not the end of the story. Araman has  Potterley, Foster and Nimmo arrested and brought to his laboratory where he reveals  the truth of what is is going on.  The final scene is silent  – and heartbeaking.

This  is  a very effective piece  of drama, well-scripted and directed,the cast is uniformly excellent. Tt raises qestions about  whether progress is always a good thing, something that seems very pertinent  in our “brave new world” of   unescapable social   media  and non-stop 24 hour news. Do we really want to know everytning about everybody? And what of the personal?  In the end,  Asimov,  suggests “You and I” do count, count a great deal, in fact.

Posted in 1960s, Irene Shubik, Isaac Asimov, Jeremy Paul, Out of the Unknown, television drama, timetravel and tagged Out of the Unkown, The Dead Past. Bookmark the permalink.
M.A.L: the writing and journalism of Madeline Linford, 1916 to 1965: the first woman on the editorial board of the Manchester Guardian