Out of the Unknown, Series 1, episode 11: “Thirteen to Centaurus” by J G Ballard,

“Thirteen to Centarus” was broadcast on 13th December 1965

J G  Ballard was one of the most influential  post-war British writers. His work includes novel such as The Drowned  World, The Crystal World, Crash, High Rise and Concrete Island.  Whether or not he was a science fiction writer in the classic sense is open to debate –  his  preoccupations are often inner space, rather than outer space –  coupled with dystopian tales  of modernity in Britain:   Ballard’s manor  is  the world of supermarkets, motorways and high rises.

“Thirteen  to Centaurus” is a short story  which was first published in Amazing Stories in  April 1962. This  adaptation follows the story closely with some  minor alterations. 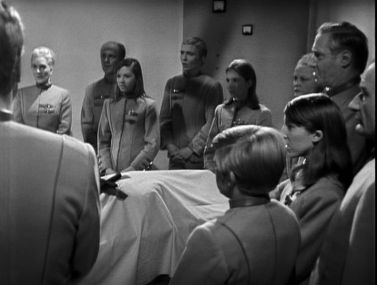 Set in a station whose purpose is yet to be revealed,  it begins with the  funeral of the captain with those present heartily singing “Onward Christian  Soldiers” as the coffin is dispatched into, well, where exactly?

In this community,  numbering just a dozen, Dr Francis wields  much authority,  constantly monitoring the behaviour and thoughts of the crew. He orders a young woman  Zenna to report for conditioning which he says is weakening in her: we  see the inhabitants working out in the gym to the accompaniment of a recorded voice, endlessly repeating:  “This is the world and the whole world. There is no other  world but this. There are no other  creatures but the chosen, and their children shall  the universe. This is the world and the whole world…”

But a young man called Abel  (who suffers from a recurring  dream of a burning disk) is asking pointed  questions of Francis.  Abel  is the Einstein of this tiny world. In his essay about the station he called  it “The Closed Community” and  worked out that  the station appeared to be revolving at about two  feet per second.   Francis  decides  is now  time to tell Abel the truth  and puts him  under the  conditioning to bring back his memories.

“When  you wake up you you will know  the truth:  that this station is in fact a spaceship. We are travelling from our home planet  Earth to another planet million of miles away. Our grandfathers  always lived on Earth. We are the first people to  attempt  such a journey. We were chosen from all people.  You can be proud of that Abel.. You were chosen before  you were born.  Your grandfather was a great man,  he volunteered to come – and so  you are here too. Never forget …The station must be kept running properly…this is a multi-generation space vehicle. Only your children will land  and they will be old when they do.”

He explains to Abel that the ship set out 50 years ago and is heading for a planet that revolves around  the Alpha  Centauri.“The social  engineering that went into the building of this ship was more intricate than  the mechanical side….One day the project will be you responsibility.”

So now we and Abel  know the truth. Except we don’t know.  For on one of  Francis’s screens showing the starfields a shadow of a man  appears,  prompting  him to go through a hatch  to find himself…not in outer space,  but  firmly on the ground on Earth.

The station is in fact a  scientific project to test the ability of humans to endure centuries of travel to the stars. They have been conditioned not to question why Dr Francis is not an old man.  But the mood of the government and  public has changed since the project began  50 years before.  One of his colleagues tells Francis. “Even the public is beginning to feel that there is something obscene about this human zoo.  What began as a grand adventure has dwindled into a grisly joke.”

The new commander General Short  tells  Francis that a decision  has been taken to shut down the project.  “What we propose is a phased withdrawal, a gradual re-adjustment  of the world around the crew, that will bring them down to Earth as gently as a parachute. Some of you may have other suggestions. But however we do  it, Project Alpha Centari will be discontinued…The returned   crew will have to be given every freedom and every tv station and  newspaper network in the world  will want to interview  each of them a hundred times.”

Francis  vehemently objects; “It’s crazy. They will be bound to find out the truth… I don’t think you know what you are  saying General.  Bring them back? How can you bring back the dead?  How can you restore  the lost hundred years?… The task of the original project was to get them to Alpha Centauri. Nothing was said about bringing them back. ..I/m thinking about the crew. If it takes 50 years to get them there, it should take the same time  to bring them back. ..What I don’t know is how each individual is going to react. The people inside that dome hav veen taught to believe since they were children that they are living in a world of their own..and that they would never meet anyone else in the whole of their lives. …The people inside that dome do not want to come out. “

Francis suggest  a chilling  alternative solution:  that the project continues but with  no further children being born until the crew  are all dead as the life span within the dome is only 40 years on average.

Back inside the station the balance of power  begins to shift from Francis to Abel who has started an experiment, conditioning  Francis every day for hours on end and unsettling him  by changing the meal times.   Francis stops leaving the station, which worries the controllers of the project.  They prepare to send in a recovery crew,  but Francis threatens to reveal the nature of the project to the station  crew and the raid is called off. Finally he cuts  off all communication  with the outside world  with the words, “I’m going to Alpha Centauri.” Short wonders, “Whose really in control?”

We discover that Abel in fact   knows  there are people outside the station, something he seems to have known for some time.  When Francis discovers he tells him he should leave and  be free Abel responds, “Free?  What does that mean? Neither of us is free. This is our whole world and these are our people. The burning disk is the eye of God and Abel is his servant,chosen of the Lord.”

Abel  continues his experiment on Francis,   conditioning him to lose  his memories of the outside world. and to make him believe that he  is flying to Alpha Centauri but will never live to get there.  At the end of the episode  Abel plays  a recording he has made himself: “This is the voice of the chosen of the Lord. This is a spaceship.  We are the first people to undertake such a journey Doctor Francis.  This life is your only life. This ship is your only world. You will never see another. You are flying to Alpha Centauri. You can be proud of that, Doctor Francis.”

In  his epic poem Paradise  Lost Milton gave a now famous line to Satan: “Better to reign in Hell than serve in Heaven.” Is that the choice that Abel has made?

This is a successful  production, creating  a  distinct claustrophic intensity and makes good use of  the array of   solid acting talent eg Noel Johnson and Robert James  available to the director. James Hunter is particularly  good as Abel, moving convincingly  from gaucheness to  authority in the course of the episode.

Where Have I Seen Them Before?