Tag Archives: The Word for World Is Forest 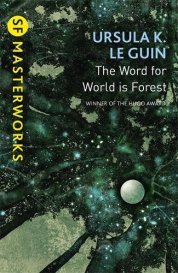 Ursula Le Guin is one of the most important science  fiction writers of the twentieth century, whose works such  The Left Hand of Darkness and The Dispossesed   continue to be very influential.  Ursula  was an activist in the USA in the campaign against the Vietnam War,  and The Word for World Is Forest clearly emerged from that experience. Much of the  war was fought in forests between the Americans,  who had vast  military techonology, and the guerilla army of the  Vietcong, who had no such weaponry, but  were armed instead  with an  unrelenting desire to be free.

The novel  is set on Athshe, a planet  entirely covered by forests  in which live the Athsheans, a  small,  peaceful,  highly intelligent,  humanoid  race whose bodies are  covered  with green fur.  The planet is colonised by  several thousand Earthmen –   who rename  it New Tahiti   –  and begin cutting down the forests and shipping  the wood  back to Earth. They make virtual slaves of the Athsheans,  using them as labourers or  for sexual  gratification as there are few  Earth women.

The  three  main characters are the Earthman Davidson,  the Earthman Lyubov,  and the Athshean  Selver. Davidson is a military man who regards the Athsheans  (or “creechies” as the colonists call  them) with contempt: “the creechies are lazy, they’re dumb, they’re treacherous, and they don’t feel pain”. He personifies the masculine mindset,  reflecting  to himself: “the fact is the only time a man  is really and entirely  a man is when he’s just had a woman or killed another man”.  Lyubov,  by contrast,   tries to underestand the Athsheans, their culture of singing , their  symbiotic relationship with  the forest, and the fact that the Athsheans dream when  they are awake as well as when they are asleep.

Davidson rapes Selver’s wife who dies.  Selver realises that the Earthmen  intend to destroy the forest,  and therefore his people,  unless they are stopped  – and  begins to dream of a way of achieving this. He tells his people:

If we wait  a lifetime or two they will breed, their numbers will double or redouble. They kill men and women, they do not spare those who ask life. They cannot sing in contests. They have left their roots behind them, perhaps, in this  other forest  from which they come, this forest with no trees. So they take poison  to let loose the dreams in them, but it only makes them drunk or sick. No one can say whether they ‘re men or or not men , whether they’re sane or insane, but that does not matter. They must be made to leave the forest. If they will not go they must be burned out of the Lands, as nests of stinging-ants must be burned out of of the groves of the city…Tell any people who dream of a city burning to come after me..

Selver co-ordinates attacks from  thousands of Athsheans on the Earth settlements, killing many men and women,  and setting fire to the buildings.  His friend Lyubov dies in one of the attacks. Selver  pens the survivors into a compound and negotiates a truce. This is broken by Davidson who  organises attacks on the Athshean cities in the forest. Finally, Selver captures him alive, and tells him:

Look Captain Davidson..we’re both gods, you and I. You’re an insane one and  I’m  not sure whether I’m sane  or not, But we are gods…We bring each such gifts as gods bring.  You gave me a gift, the gift of killing of one’s  kind, murder. Now, as well as I can, I give you the my people’s gift which is not killing. I think we each find each other’s gift heavy to carry.

Davidson is not killed,  but put  on a treeless island, to live alone. Emissaries from Earth and other planets  arrive who prepare to evacuate all  the surviving  Earth colonists.  One of the envoys asks Selver whether Athsheans are  now killing Athsheans. Selver replies sombrely :

Sometimes a god comes…He brings a new way to do a thing, or a new thing to be done. A new kind of singing, or a new kind of death. He bring this across the bridge between the dream-time and the world-time. When he has done this, it is done. You cannot take things that exist in the world and try to drive them back into the dream, to hold them inside the dream with walls and pretences. That is insanity. What is, is. There is no use pretending  now, that we do not know how to kill one another.

As well as the background of the Vietnam War, there are clear resonances in the novel of the way that  native Americans were treated by European  colonists who raped and killed them and took their land; and  the similar  experience of the Aborigine peoples of Australia, who also talk of a “dream-time”.

While  Selver and Lyubov  have some complexity as  characters,  with Selver  feeling that what he has unleashed is dreadful   but also feeling that he has not other  choice, Davidson is  one dimensional,  a man in thrall to  his own needs and desires –   and with no empathy for others.   Reflecting some years later Ursula acknowledged this flaw  in the novel. “….he is purely evil – and I don’t, consciously, believe purely evil people exist. But my unconscious has other opinions. It looked into itself and produced, from itself, Captain Davidson. I do not disclaim him“.

Whether she intended or not, Ursula’s novel is very much a feminist riposte to  Robert Heinlein’s Starship Troopers (1959)  – written against the backdrop of the Cold War  –  which  imagined  a  future society in which you can only become a citizen by serving in the military. It is in fact a paean to the alleged virtues of the military “code of honour” , a code unpicked  by Ursula in this novel to reveal its true reality: racism and murder.

The Word for World Is Forest had some influence  on “Kinda”,  a 1982 Doctor Who serial  written by Christopher Bailey,  his   first script for Doctor Who.  Like Ursula’s novel “Kinda ” is   set in a forest with a people  confonting colonists and is  a psychological, rather than an action serial, with layers of meaning and  a number  of spiritual  reference.  Bailey says  that he tried to write it without any people being killed, and  that he  name the main  characters after Buddhist terms, including the Mara (“temptation”),  Panna (“wisdom”),  and Anatta (“without self”).    Incidentally Panna was played by the wonderful  Mary Morris who,  among many other roles,  appeared in the BBC science fiction series  A for Andromeda and The Andromeda Breakthrough as the scientist Madeline Dawnay.