Tag Archives: October the First is Too Late

Time Travel with a Twist: October the First is Too Late by Fred Hoyle (1966) 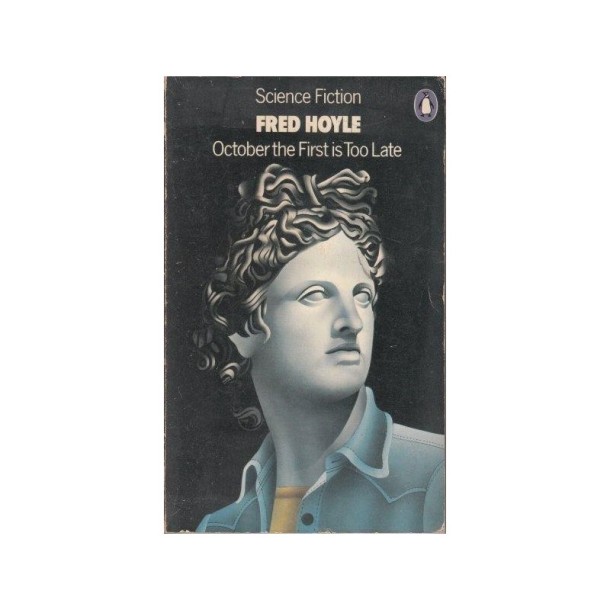 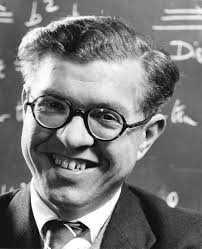 Fred Hoyle was a well-known scientist who appeared regularly on television  and  in the press  in the 1950s and 1960s. I have written in more detail about his career in a previous post about  the 1961  television series A for Andromeda.

October The First Is Too late is one of  a series of science fiction novels he  wrote in the 1960s,  which were popular at the time,   but largely forgotten nowadays. In his introduction to this novel Hoyle writes: “The ‘science’ in this book is mostly scaffolding for the story, story-telling in the traditional sense. However, the discussions of the significance of time and of the meaning of consciousness are intended to be quite serious…”

Hoyle’s novels often have a scientist as the main protagonist,  but in this novel  it is a musician  and composer named Dick: accordingly each chapter is named after  a musical theme or style eg “Fugue” and “Coda”.  The novel begins in 1966 when he runs into an old university friend John Sinclair, now a scientist,  and on an impulse they set off  together on a trip to Scotland. Something very odd happens here. Sinclair  disappears   for half a day,  and on returning cannot explain or recall what has happened to him. Later,  when  they are swimming Dick  notices that a birthmark  that Sinclair previously  had on his back has vanished.

The trip is cut short when  Sinclair is recalled to the USA to assist in the investigation of a strange  solar phemonena.  Dick  accompanies him to California where he has a brief affair with a young actress. They  then journey on to Hawaii, where  Sinclair  and others establish that the Sun is somehow being used as a signalling device with an enormous amount of data being transmitted.  Barely have they absorbed this astonishing fact when  all contact is lost with the USA:  it is feared that a nuclear war has begun.

Dick and Sinclair manage  to get  places on a plane sent to investigate what has happened. Flying above Los Angeles there is no sign of  a war: the city is simply no longer there,  just woods and grassland in its place. Journeying on, they see the same across the continent:

Truth to tell I think everybody wanted to take a look  at New York. It was much the same story as we flew over the Applachians in the fading light. But there were far more signs of life here, far more primitive shacks. It all looked as America might have looked around the year 1800. Darkness came on. We saw little more, except twice there were flickering lights below us, fairly obvious camp fires. Then we were out over the Atlantic. 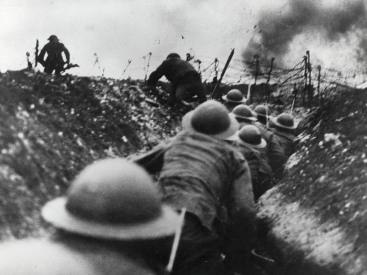 Crossing the Atlantic they find to their relief  that the England of 1966  is still there. After landing they are taken  to meet the Prime Minister and  defence staff  to tell them of  what they have seen. They learn that Britain has lost touch with Europe:  planes sent to investigate did not come back.  Then boats from the Continent  begin to arrive at English ports,  and they discover that Europe has gone back in time  to September 1917 and the First World War is raging.

..like all of us in our daily lives, you’re stuck with a grotesque and absurd illusion…the idea of time as an ever-rolling stream. The thing which is supposed to bear all its sons away. There’s one thing quite certain  in this business: the idea of time as a steady progression from past to future. I know very well  that we feel this way about it subjectively. But we’re the victims of a confidence tick. If there’s one thing we can be sure in physics is that all times exist with equal reality. If you consider the motion of the Earth around the Sun, it is a spiral in four dimensional space-time. There’s absolutely no question of singling out a special point on the spiral and saying that particular point is the present position of the Earth. No so far  as physics is concerned.

Sinclair suggests that what has happened is that the people in the various time zones are in fact copies,  which explains  the signalling they detected:

It’s as if the present  world were built out of copies of bits of the old world. Do you remember the day on the moor below Mickle Fell?  Don’t you realise it was a copy that came back to the caravan that night. Not quite a perfect copy, the birthmark was missing….Different worlds remembered and then all put together to form a strange new world. We shall find out more as we go along. This isn’t the end of it.

The British government makes contact with the armies fighting in Europe and brings about a ceasefire. Meanwhile Dick and  Sinclair  embark on a further flight to see what other time zones there might be.  Where Russia once  was, there  is now  a vast unbroken plain of molten glass,  while  the Aegean is in the time of  the Ancient Greeks  they fly over an intact Parthenon. This  discovery leads Dick to join an expedition of scholars and others  which sails from England  to Athens. He takes his piano  with him. 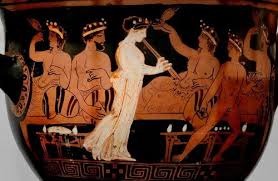 On arrival the Athenians welcome them and accept their story that they are from a far-off  northern land, although they soon take their ship from  them  when they realise how fast it will travel with engines. It is the year 425 BC and Athens is at war with Sparta. Dick’s skill with the piano, an instrument unknown  in this era, makes him a popular guest.

Dick  resumes composing,  and on a visit to a temple comes across a tall,  very attractive young woman, looking quite unlike the other women in Athens. He assumes that she is a priestess,  and their meeting finishes with an agreement to engage in a musical  contest which  ends in a draw. After spending the night with her,  Dick  wakes somewhere  completely different in a room with advanced technology.

Unexpectedly John Sinclair is also there. After searching the world he had  found  this time zone, which is 6,000 years in the future. The “priestess” Melea is in  fact from this time,  and they learn from  her and their other hosts that  after the  C20th the world had gone through a cycle of civilisation leading to war  and  then a new civilisation and then a war  many times until they made a conscious decision to stop the cycle.  The population of the world is just 5 million,  with only what used to be Mexico is inhabited: the rest of the world is grassland.

They tell the two men  that what has happened with  the different time-zones is an experiment by an unknown intelligence, and that only this future time will survive. An elder explains:

Your people exist only in a ghost world. For a little while your world may have a vivid reality, but very soon, now that we have made our decision, it will be gone. It will go in a brief flash, just as it arrived.

...the different  time zones of the Earth will change  back to what they were before. The Greece in which me met, the temple, will be gone. It will gone more completely  even more than the ruined remains of your own time. It will be gone almost without trace. It will be gone, except for the records in our libraries. Europe too will be gone, so will the great Plain of Glass. It will only be this zone here that will remain.

Sinclair attempts to explain to Dick  what has happened, that their lives have forked in two directions:

Sinclair  decides to leave,  as does Dick, but then  changes his mind at the last minute and decides to stay in the future. Two years later he reflects:

The prognostications were correct. Within a few hours of the departure of John Sinclair, the world reverted to ‘normal’.  The England of 1966,  the Europe of 1917, the Greece of 425  BC, all vanished just as remarkably as they had appeared. I have not seen John again, nor do I think there is the smallest possibility I will ever do so…More and more the old life has become vague and remote, like the memories of distant  childhood. This gradual evaporation of a life which at one time was so intensely vibrant has come upon me with profound sadness…I have no doubt now that it was the real John Sinclair who was sent out from here – into oblivion. The irony and tragedy is that to the two of us it was the world of 1966 that was the real cul-de-sac.

This is first and foremost a  novel of ideas and possibilities.  Hoyle is not a great writer, his prose is often pedestrian,  and  we never feel particularly  engaged with the characters, in fact I found Richard rather smug and self-obsessed.  As a character  Melea seems present mainly  for sex interest. The  central  conceit of a world of different time zones is what  holds your  interest  and keeps you reading, waiting for an explanation,  although in the end  we never get a definitive answer  to the mystery, we never learn who is behind this  experiment.  Also  Hoyle has a habit of bringing the narrative to a shuddering halt while his characters  engage in pages of philosophical  or scientific discussion: at times it does feel  rather feel  like a lecture series disguised as a novel.

You can read the novel online here. 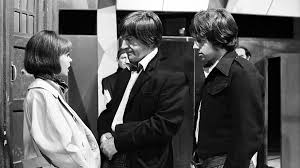 One final  intersting point. In 1969 Malcolm Hulke and Terance  Dicks wrote in great haste  a ten part serial for Doctor Who called “The War Games”. In this serial the Doctor and his companions, Jamie and Zoe,  lands in the midst of what appears to be the First World War. The Doctor tells Jamie:”We’re back in history, Jamie. One of the most terrible times on the planet Earth.” But  then  they discover that other wars from history such the Roman invasion of Britain, the Mexican Revolution and the American Civil War are taking place in different zones.  They are not on Earth at all, but on another planet where the war games are being run by an alien race so that they can create an invincible army to conquer the galaxy, assisted by a renegade Time Lord, the War Chief.

There are some intriguing similarites between October the First is Too Late and “The War Games”; the idea of co-existing time zones, one of which is the First World War.  It may be that either Hulke or Dicks had read the novel,  and  that some of Hoyle’s notions fed  into their pool of ideas for writing the Doctor Who serial.

You can read my post about  Malcolm Hulke here.

Posted in 1960s, Fred Hoyle, novel and tagged Doctor Who, Fred Hoyle, Malcolm Hulke, October the First is Too Late, Terrance Dicks, The War Games. Bookmark the permalink.
The journalism of Madeline Linford from 1917 to 1965: the first woman journalist on the Manchester Guardian