Out of the Unknown, series 1 episode 5, “Time in Advance” by William Tenn

The story is set in a future society where you can opt to serve your sentence before committing the crime.  It  begins with  Nicholas Crandall  (525509) and Otto Henck (5245514) returning  to earth after seven year hard labour on the colony planets. The two prisoners   have survived the rigours of their hard labour by looking after each other, although Crandall has lost his hand in a lava  accident. (They arrive  aboard a  convict spaceship called  the  Jean Valjean, incidentally, please note Victor Hugo fans.)

The “pre-criminals” as they are known  leave through the “Liberty corridor” and are  now free to commit the murders that they have confessed in advance that they intend to commit.  The media are there as they emerge, eager to know the names of their victims.  After checking whether  they still want them,   the Examiner hands Crandall and  Henck  their licences which allow them “To go forth from this place and kill one man or one woman of your own choosing.” 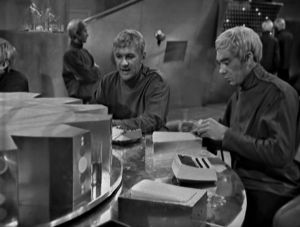 They lodge at the Hotel Capricorn Ritz, where you check in with a handprint and the  drinks are served by a machine. Whilst in the bar  they see their arrival announced  on television, “It might be you they are after,”  teases the newsreader. Henck intends to kill his  unfaithful wife, Elsa: Crandall has not  publicly revealed his victim,  but we learn that it   is  man called Stephensen, who  stole his work  for a unlimited power source and has  made a fortune whilst Crandall has been in prison.

In the bar Crandall meets Paul  Ryman, a former work colleague, who cannot get away from  him quick enough. (We later find out  that he betrayed Crandall by assisting Stephensen).  It’s the first in a series of encounters with people who fear him., including his ex-wife Polly who believes that she is the victim because she was unfaithful to him, unknown to Crandall. ” I made a mistake. I thought he loved me. I would never have divorced  you if I had known what he was really like… Please don’t  kill me,” she begs.   When his brother Dan  tries to kill him with a weapon, we learn that it was he that had the affair with Polly. Crandall lies to the police to save his brother from prison.

Henck has failed to locate his  wife. She has moved, her  flat been demolished and the area is now a  huge nature park . He tells Crandall, “It’s the last thing I expected, I  just stood in the middle of the park not knowing what to do.. You don’t understand Nick. .All the time we were away , all the while I keep thinking of how it was going to be when I finally caught up with her. The times I dreamed of it  and it always happened in that  place. It just isn’t there any more.”

Marcus Henson from  a media company  offers Crandall  50,000 credits for an exclusive story. “The public is excited by it. They have been lapping  up the details  ever since you landed… But the biggest thing they want to know about, and that’s why we are prepared to pay so much, is that special piece of information that just clinches your story…What do you think they are all excited about? What do you really think they are guessing at? …They are trying to figure out who your victim is going to be. You tell us. We follow your story. We’ll be there when it happens,  and you can retire a rich man, while at the same time completing what you set out to do.” Crandall turns down the offer. 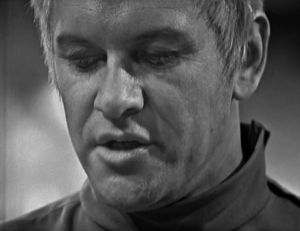 Henck  finally discovers  that his wife has been  dead for two years, and  is now bitter about   his decision. “Seven years of my life gone for nothing and now no future,  nothing to show for it, not even the satisfaction.”  Crandall responds,  “I’ve spent those last seven years hating one man, wanting my revenge, only to find  the others, the ones I  loved and trusted,   meant  no more to me in my life than Stephensen. I don’t know what it’s about anymore,  I don’y know love and hate mean . I only know thatI iam tired. All that effort trying to keep alive on the colonies. I am beginning to think there was point in it, no point at all. “

Crandall makes an appointment to see Stephensen at his laboratory, while  Marie, a  betrayed  ex-lover of Stephensen’s,  gives him a weapon. But the meeting does not go the way Crandall expects.

Strip away the futuristic  gloss from this story (the  shiny sets look like  the future as imagined by Tomorrow’s World)  and it boils down to an old-fashioned moraility tale:  that dreams of revenge can destroy you.  Despite the premise, there is hardly any tension in the story. Rather than  racing to complete their tasks, the two men spend much of their  sitting around in the hotel bar drinking (two credits for a drink, by the way). By the end you are not sure whether  care very much  about what you have just seen.

Most of the cast  wear blond wigs, remarkably similar to the ones we saw in a previous episode, “The Counterfeit Man”. Perhaps they were recycled?

Mary Crozier reviewed the episode for the Guardian on 2 November

There is no doubt that when science fiction is bad it is very bad indeed and last night’s play illustrated  this ecellently . “Time in Advance” by William Tenn  was based on the quaint notion that on the earth of the future those with a criminal tendency can apply for lience to commit a crime – but first they have to serve a penal term in Outer Space.

The opening of the story was about the best bit where the convict ship was nearing earth and the ex-convicts were shuddering, trapped in their bunks in the orbital countdown. This was horrid, of course, and in the fashion of science fiction, some of them had hideous growths or wounds on face, chest or hand. But at this stage you could not tell  quite how dull it was going to be on earth when the two would-be murderers started their grim work. The action took place in a singularly hideous hotel called the Hotel Capricorn Ritz where all the gimmicks of the future were singualrly scientific and unhomely.

The precriminals as they were called got  mixed up in many complications and the story was so stupid that it seemed only natutral that the transmission broke down altogether as if in despair. It is amusing to make fashion note on science fiction; all the men and  women  in this programme had the regulalion fair, shaggy hair combed forward and the regulation tunics so that they looked like a cross between pupils of a progressive school and pre-Revolution Russian peasants.

The great difference between this play and the recent  “The Counterfeit Man” was that the characters were totally uninteresting and the plot incredible. But the sound effects by the radiophonic workshop were very clever indeed.

Where have we seen them before ?

Peter Erickson wrote “The Ark” for Doctor Who, broadcast  in 1964.

Wendy Gifford   played Miss Garrett in “The Ice Warriors” (1967)  in Doctor Who. She played Dr Susan Calvin in “Liar!”, an episode in series 3 of Out of the Unknown.

Jerome Wills appeared in “The Dark Star” (1962), an episode in the series  Out of this World.  He played Stevens in the memorable Doctor Who episode,”The Green Death” (1973).

Edward Judd  had a leading role  in The Day The Earth Caught Fire (1961) , a British  science fiction film in which the earth is threatened with destruction  after two atomic bomb tests blow it out of its orbit. He also appeared in Invasion (1965) , another British science  fiction film in which aliens (who are played by Japanese and Chinese actors)  arrive in pursuit of an escaped prisoner taken into a hospital. The story was thought up by Robert Holmes, although he did not write the script.  (Holmes later  used some elements of his story for an episode of Doctor Who, “Spearhead  from Space” (1970).)

Posted in 1960s, Irene Shubik, Out of the Unknown, television drama, Uncategorized and tagged Edward Judd, Mike Pratt, Out of the Unknown, Time in Advance. Bookmark the permalink.
M.A.L: the writing and journalism of Madeline Linford, 1916 to 1965: the first woman on the editorial board of the Manchester Guardian