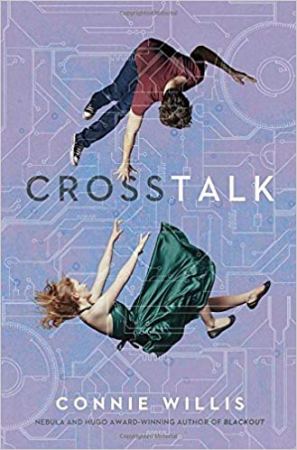 In previous posts I have written about Connie’s previous novels: Doomsday Book, To Say Nothing of the Dog,  Blackout and All Clear.

Jim is in New York doing publicity for his  blog, Gone for Good,  (in which he apparently welcomes the disppearance of things  such as payphones and  VHS tapes). Taking a walk before his next interview, he runs across a second-hand bookstore called Ozymandias Books which  he ducks into to escape a downpour.

The inside was exactly what you’d expect: an old-fashioned wooden desk and behind it, ceiling-high shelves crammed  with books streching back  into the dimness. The store was only wide enough for a bookcase along each wall, one in the middle, and a space between just wide enough for a single customer to stand. If there’s been any customers. Which there weren’t. The only thing in the place besides the guy sitting hunched over the desk- presumably the owner – was a gray tiger cat curled up in one corner of it.

Jim cannot make sense of the way that the books are positioned on the sehelves which seems completely at random with no rhyme or reason. Then he notices a attractive  blonde young  woman  disappearing into the back of the shop, except there is  no back. He finds a door and cannor resist going through,  first  going up and then down into a vast room below street level  awash with books.

The blonde stood next to the carousel with a clip-board, supervising three burly workmen  in overalls who were scooping the books up and piling them onto big metal library carts. But not fast enough. They were working at top speed, but they still weren’t able to keep up. Books were piling up on the carousel adn beginning to fall over the edge.

The woman is named Cassie and takes a Jim on a tour of  the  facility, which is neither  a bookstor nor a library, as Cassie is at  pains to  inform him

....libraries  are one of the biggest reasons we’re here…they destroy hundreds of thousands of books a year. They don’t call it  that, of course.  They call it ‘retiring books” or ‘pruning” or ‘culling’. Or ‘de-acquisition.’

The books are categorised  in different ways, from hoarders, attics,  garages, closed bookstores and libraries that have been  destroyed by fire or flood. Then there are sections  for  books left on beaches, dropped in the bathtub, torn up by a toddler, scribbled in etc..

Jim  thinks he has grasped what is going on.

It was an endangered -book archive, like those gorillasand elephant sanctuaries or those repositaries for rare type of seeds, to keep them from going extinct. And it was the scarcity of the book that determined its place here, not its collectible value or literary quaiity.

But  he hasn’t quite got it right.  Whereas we, the readers,  by now probably have.  You’ll need to read this novella  to find out for yourself, through.

Connie has written a paean of praise to books in all their scruffy, tattered, coffee-stained, dog-eared glory. Long may they continue.

Oh,  and the ending calls to mind  a short story by H G  Wells, The Door in the Wall.

To say nothing of the cat: “To Say Nothing of the Dog Or How We Found the Bishop’s Bird Stump at Last “by Connie Willis (1998)

Ned Henry is a historian in Oxford in 2067. In this era historian isn’t  someone who spends 20 years producing a monograph on late Phoenician trading patterns which sells 63 copies, earns a luke-warm review in the Times Literary Supplement and is remaindered  within six months. In this era historians are travellers sent back on time trips (or “drops” as they call them) to carry out detailed reconnaisance  and research  on past historical eras and events. Too many drops, though, can give you time-lag, a euphoric state akin to being high. 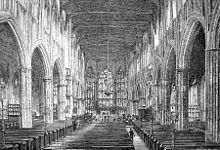 Coventry Cathedral before the bombing raid

The time travel technology is known as “the net,”  invented by a couple of chancers who hoped to ransack history for priceless artifacts but then discovered that objects from the past cannot be transported through time, only humans can travel back and forth (or so it’s thought). Ned and his fellow historians are working on a multi-million project to rebuild Coventry Cathedral exactly as it was before it destroyed in a Luftwaffe bombing raid on 14th November 1940, Oddly it’s not being built in Coventry,  but in Oxford. The project  is the brain child of Lady Schrapnell, whom I imagine as  a cross between Lady Bracknell and Mrs Thatcher. She is not be brooked over the slightest  minute detail.

The story begins with Ned poking around the ruins of the Cathedral days after the raid,   trying to locate the bishop’s bird stump, a hideous Victorian flower ornament which has vanished –  and which Lady Schrapnell has insisted must be found. Unable to locate it he returns to Oxford where he meets  fellow historian Verity Kindle,  who has been infiltrated into the Mering family at Muchings End in Oxfordshire in  June 1888. 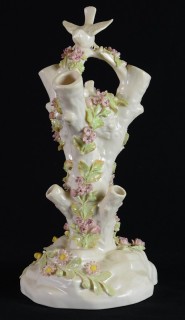 At this point a cat enters the story, Princess Arjumand,  who belongs to Tossie Mering, spoilt daughter of the family with a penchant for babytalk. Somehow the cat returns with Verity to 2067 after she rescues it from drowning.  It is imperative that  Princess Arjumand must be returned to 1888  to close the incongruity. (Ned has fallen instantly in love with Verity, by the way).

Ned is also sent back to  June 1888 and falls in with  a Balliol  undergraduate  Terence St Trewes (who has  an annoying habit of quoting Tennyson at every turn), his bulldog Cyril  and Professor Peddick. Terence is in love with Tossi Meringe,  and  thus the three men and the dog set off  on a boat trip along the Thames to Muchings End with many mishaps on the way. If  you  are thinking that this sounds rather familiar, you would be right. Ned and his party actually pass Jerome K Jerome  and his party on the journey which becomes the book  Three Men in a Boat (to say nothing of the dog), published the following year.

Arriving at Muchings End,  Ned discovers Priness Arnjumand in his luggage, alive  and well, and meets Verity again who has returned from Oxford.  They now become embroiled in a series of increasingly farcical  events which involve returning the cat to Tossie and stopping  her marrying Terence, which will cause another incongruity as they know from her diaries that she married a mysterious “Mr C” after meeting him on a visit to Coventry Cathedral.  It was Tossie’s diaries, read by her  descendant Lady Schrapnell,  that inspired the Coventry Cathdral project.  A change in history could be catastrophic.

What follows are  nightime assignations, deceptions, impersonations,  coincidences, manipulations  and seances with Madame Iritosky – to say nothing of  Cyril and Princess Arjumand. And  there is still  the question of what happened to the bishop’s bird stump.  At one point  a drop lands Ned and Verity  in  the Cathedral  on the night of 14th November as it  is being bombed;  they barely escape with their lives.

Coventry Cathedral after the bombing raid

It felt like a direct hit. The blast rocked the cathedral and lit it  with with a blinding white light. I staggered off my knees, and then stopped, staring across the nave. The force had  knocked the cathedral momentarily clear of smoke, and in the garish afterlight  I could see everything; the statue above the pulpit engulfed in flames, its hand raised like a drowning man’s; the stalls in the children’s chapel, their irreplaceable misereres  burning with a queer  yellow light; the altar in the Cappers’ Chapel. And the parclose screen in the Smith’s Chapel….

I flung myself through the door and through the tower door and up the firelit stairs, wondering what I was going to say to Lady Schrapnell. In that one bright bomb-lit instant I has seen everything: the brasses on the wall, the polished eagle on the lectern , the blackening pillars. And in the north-side the empty wrought-iron flower stand.

It had been removed for safekeeping after all. Or donated as scrap. Or sold at a jumble sale.

Lady Schrapnell had been wrong.The bishop’s bird stump was not there.

As the novel’s  full title suggests,  in the end the mystery is solved.

This is a hugely  enjoyable and entertaining novel which frankly came as a welcome relief after some recent science fiction novels  I have read,  whose plots  – involving  artificial intelligence and  jumps across the universe etc  –  seemed  humourless  and gave me a headache. We need more novels like this.

Posted in 1980s, Connie Willis and tagged Connie Willis, To Say Nothing of the Dog Or How We Found the Bishop's Bird Stump at Last. Bookmark the permalink.
Escape to Danger