“the Moon will become the seventh Continent of our Planet…”: life in the twenty-first century, edited by M Vassiliev and S Gouschev (1961)

First  published in the Soviet Union in 1959, the authors compiled accounts from  29 Soviet scientists on what life might be like in 2007.  It is unlikely  that such a volume would have been translated and published in the West ten years previously,  but the Soviet  launch of Sputnik, the first satellite sent into  earth orbit,  stunned the world in October 1957. The Soviets followed this  with further satellite launches,  and then  sending the first man into space, Cosmonaut Yuri Gagarin, who orbited the world on 12 April 1961. Previously regarded as a country barely emerged from peasantry, the Soviet Union now seemed to  be at the forefront of scientific discovery and development, and hence became the focus of intense interest.

This volume was published by Penguin as number 195  in their Penguin Specials series in 1961.

The book takes the form a gentle meander by the authors  through the studies. lecture halls  and laboratories of Soviet scientists. (Whether this actually happened,  or  whether it is  just a literary conceit and the chapters were written by the scientists themselves,  or indeed  a  Committee we have no way of knowing.)

first chapter “Learn to Dream”  begins with a vist to the study of Alexander Nikolaievich Nessmayanov. “On a huge desk stood a bronze Atlas bearing on his shoulders a gleaming globe. Portraits of Russian scientists hung on the walls. In one corner a wooden bust of lenin, smiling , the work of the well-known sculptor S. T. Konienkov…”

He tells the authors, “We do not always care to dream, nor are we always capable of dreaming, but it  is essential to do so. Without dreams prospects do not exist, without dreams man, the scientist included, is inevitably halted in his progress. Creation is not consistent with kicking one’s heels.”

Subsequent chapters encompass a range of  predictions.  In the future it is suggested  that

From the viewpoint of this blog the three  chapter on space exploration  are most interesting. Our guide to  the future in chapter 26 “Space Travel” is the scientist  U. S. Hlebsevitch. He suggests that radio controlled unmannned space craft will be  best way of  conducting the space explorations of the future, thereby eliminating the need to send vast stores of food and fuel into space to feed and sustain the Cosmonauts.

In the next few years we shall approach  the Moon, Mars,  and Venus  without waiting for an artificial satellite capable of carrying human occupants. The first guided rockets will soon explore the Moon and in the following five or perhaps ten years there will be a permanent scientific observatory on the Moon.  Return flights to the Moon will become a commonplace  by the end of the century. At the beginning of the twenty-first century the Moon will become the seventh Continent  of our Planet. and, strange though may sound now, we shall be in a position to exploit its natural wealth…

He goes on to posit  that the Moon will  initially be explored by an unmanned rocket carrying an exploratory vehicle which will examine the soil, temperature  and surface and send back the results by television and radio. He does not rule out other life in the solar system:

Today we are planning on the assumption that neither Mars nor Venus are inhabited. But suppose we find this to be untrue? Then we shall try to build space  ships which can enter into radiotelephonic or television contact with the inhabitants of those planets. Only then shall we tackle the most difficult problem of how to land on them.

He envisages using the Moon as a broadcasting platform:

Hlebsevitch suggests an earth observation station will be established on the Moon toprovide   very accurate weath forecasts for the whole planet, and that satellites will give advance  warning of harmful cosmic radiation and meteors

Finally,  he sums up in true Soviet style:

All I have said , all my forecasts can only be realised provided the peoples of the world remain at peace. The combined forces of science and the human brain must be utilised,  not for an armaments race,  but for the solution of those grandoise problems, the only problems worthy of man. If the endeavour and money spent on missiles with war-heads were used in preparation for interplanetary flight our forecasts would be proved very much sooner. 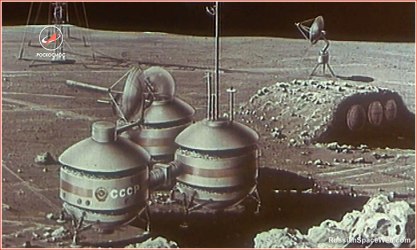 In Chapter 28 “In The Lunar City” Nicholas Alexandrovitch  Varvarov describes what a Soviet permament  base on the Moon might look like:

The aluminium was mined on the moon, the glass and the plastic materials were made in lunar factories. The water comes from the depths of the satellite and gives the neccessary humidity for the cultivation of the soil. Oxgen and nitrogen are obtained from lunar materials. The lamps  which burn during the long night, which lasts almost a month, are fed from batteries which, at the same time heat the city and supply the power for the factories. All this has been set in motion and the whole work is designed to utilise the energy of local and solar atomic power stations.

The lunar city is not only self-supporting  but is also working, one might say, for export. For example, synthetic fuel for rocket servicing is prepared  for rockets departing for the earth; plans are ready for the construction of a wharf for cosmic ships. Soon rockets, built in lunar factories, will depart on long-distance journeys. The lunar cosmodrome will soon see the launching of an enormous rocket bound for Mercury, having on board the first expedition of earth’s scientists.

Finally, in chapter 29  “Through Interstellar Space” Kiril Petrovich Stayukovitch  imagines photon engines which,  by  combining matter and anti-matter, will propel the rockets to the speed of light:

…, the course of time on it would be much slower than on earth. On the basis of the meaurement of time on earth a hundred years could elapse. In this time the space ship would travel a distance …corresponding to a hundred light years. But in reality, aboard the space ship only two or three years would elapse and the men on board would only age to this extent. They would visit planets and stars at a great distance from our  sun  and the return journey  to the earth, acording to their time, would be in two or three years.  Nevertheless, on their return to earth the astronauts  would not find a single person  they knew still alive. Because on earth, during the same period , two hundred years would have elapsed.

All contributions in life in the twenty-first century display boundless faith in the ability of science to solve all problems. But as we now know the Soviet plans for interplanetary travel, devised by Sergei Korolev, encountered many problems and were cancelled. The Soviet Union itself dissolved on 26 December  1991.

I  have not been able to find  anything about the authors, Mikhail  Vassiliev and Sergei Gouschev. I did discover that a character  called Mikhail Vassiliev appears in Philip Pullman’s short story, Once Upon a Time in the North (2008)

This is a list of all contributors was carried as an appendix in the book.

A.N. Nessmayanov:
President, Soviet Academy of Science. World-renowned authority on organic chemistry in general, and on the metallo-organic aspect of it
in particular.
J.P. Bardin:Vice-President, Academy of Science. Pioneer of Sovietmetallurgy; took the leading part in constructing the Kuznetsk Steelworks in the early years following the Revolution.
I.S. Garkousha and N.A. Fedorov: Two young Russian scientists and engineers who are acknowledged as the country’s leading authorities on the underground  gasification of coal; they work together as one man on research and projects in this sphere.
S.I .Mironov and M.A. Kapelyushnikov: Both belong to the older school of Russian scientists, the first a full member of the Academy of Science and the second an associate member. Both have behind them a lifetime of research and study in  their speciality – oil; despite years, are still ‘young’ enough to look keenly ahead.
A.V. Vinter: Academician; the doyen of Russia’s hydro-electric power schemes; was at Lenin’s elbow when he drew up the general
electrification plan; had main responsibility in the building of the first two Soviet power stations, commenced in 1918.
V.I. Popkov: Associate, Academy of Science; one of the rising generation of Russian technologists; writer of
numerous highly speciali zed works on electric power.
G.I. Pokrovsky: Professor; specialist in the technique of explosives and explosions; paints, writes poetry, and composes music
in his spare time.
V.A. Engelhardt: Principal of the Department of Biology, Academy of Science.
M.G. Ananiev: Bachelor of Medical Science; Principal and Head Surgeon of an ultr-modern Moscow hospital where bloodless, supersonic
surgical methods are practised.
S.I. Volkovitch: Academician; specialist in agronomy.
L.A. Zenkevitch: Associate, Academy of Science; Chair of Invertebrate Zoology, Moscow
University. His speciality is marine life, both animal and vegetable.
A.R. Jebrak: Academy of Science, White Russian Republic; expert on agriculture; views the subject mainly from a biological angle.
V.A. Kotelnikov: Young Academician and Professor of Moscow University; considered to be the country’s greatest authority on radio.
S.A. Lebedyev: Principal of the Institute of Precision Mechanism and Computer   Technology at the Academy of Science, regarded as the leading authority in the electronic computer field.
G.I. Babat: Professor; somewhat of a freelance and an individualist. Specializes in high-frequency current; his inventions in this line include an
artificial ‘sun’. Author of popular scientific works, and fiction with a scientific background.
V.L. Ginzburg: Associate, Academy of Science; astronomer, mainly in the context of radio-astronomy, to which he has contributed considerable literature.
V.V. Zvonkov: Associate Member, Institute of General Transport Affairs and Problems at Academy of Science; an authority on every form of transport.
N.F. Yevstratov: Civil Engineer and Architect; Principal of the Moscow Town Planning Institute.
U.A. Dolmatovsky: Mechanical Engineer; emphasis on motor cars.
G.A. Gradov: Civil Engineer and Architect; Principal of the Institute of Communal Planning and Construction.
E.M. Goldovsky: Professor; expert in the field of photography and the cinema, particular interest being electro- (or ‘dry’) photography.
L.V. Pustovalov: Associate, Academy of Science; Deputy Chairman, Committee for Study and Investigation of Potential Productive Energy; devotes particular attention to Siberian development.
U.S. Hlebsevitch: Bachelor of Technical Science; radio-astronomer, specializes in ‘Sputnik’ and other like projects.
D.I. Scherbakov: Academician; geographer; a much-travelled man in the remoter regions of the world.
N.G. Romanov: Civil Engineer; emphasis on the hydraulic aspect; author of a scheme for bridging the Straits of Tartary by a dam.
N.A. Varvarov: Engineer; Astronautical Consultant to U.S.S.R. Armed Forces; has made a particular study of the Moon.
K.P. Stanyukovitch: Professor; physicist whose particular subject is the harnessing of nuclear science for the conquest of outer space

Posted in 1960s, Mikhail Vassiliev, Sergei Gouschev. and tagged life in the twenty-first century, Mikhail Vassiliev, Sergei Gouschev., Soviet moon base, Soviet space travel. Bookmark the permalink.
← Out of the Unknown: series 1, episode 2 “The Counterfeit Man”(1965)
Out of the Unknown: series 1, episode 3 “Stranger in the Family” (1965) →

The journalism of Madeline Linford from 1917 to 1965: the first woman journalist on the Manchester Guardian