“fantasies of possibility”: classic science fiction in books, on television and in film

I will be writing  in this blog about science fiction in books, on television and occasionally on film. I have taken the title from H G Wells since  this  is what he himself called his work, he  never called it  “science fiction,” a  term  then unknown.

In  a preface to  a new edition of The Sleeper Awakes, published in 1921  by Odhams Press,  H G  wrote

It is the first of a series of books I  have written at intervals…they are all “fantasies of possibility,” each one  takes some great creative tendency, or group of tendencies , and develops its possible consequences  in the future.

I think H G summed  up in his inimitable style   what has always attracted me to the genre of science fiction:  the ideas and imagination which at their best can make you look at the world in a different way.

I have been reading and watching  science fiction  for more than  fifty years. As an eight  year old I watched the first episode of Doctor Who, “An Unearthly Child”, on 23 November 1963 –  and have been watching ever since.

I read the Doctor Who novels written  by David Whitaker,  The Daleks and The Crusade, and then moved on to other works, essentially  all the science fiction  novels which  Marlow Library  possessed. I read the classics – Jules Verne, H G Wells, John Wyndham, Ray Bradbury.

In addition I also read many  of  the science fiction  novels which were published by Victor Gollancz in distinctive yellow covers,  and were  therefore easy  to pick out on the shelves.  Naturally I went  to see the Doctor  Who films in 1965 and 1966 , either at the Regal Cinema in Marlow or The Palace in High Wycombe (both buildings sadly demolished).

I  also went to see 2001: a Space Odyssey  in 1968 which I enjoyed,  but struggled to understand, especially  the last section. As a child  I spent a lot of time off school with asthma  and thus books were a godsend. One of our neighbours, lent  me  back issues of an American  science fiction magazine ( I cannot recall the title),   and I read them from cover to cover, often several times. 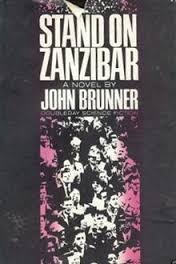 By the 1970s I was reading novels  by John Brunner such as  Stand on Zanzibar and The Shock Wave Rider, James Blish’s  Cities in Flight series,  and Ursula Le Guin’s The Left Hand  of Darkness:  on television I  was still watching Doctor Who with Jon Pertwee and then Tom Baker as the Doctor,   and also  watched series such as Doomwatch,  Survivors and Blake’s Seven.

I have also been revisiting  some  of those novels  that  I first read as a teenager : H G Wells, John Wyndham,  Fred Hoyle, for instance. Over the next few months I will be  writing  about these,  and how they seem to me now.  Of course in some sense you can never read a book twice in the literal sense;  you are never the same person as when you read it for the very  first  time.

I would be delighted to hear from anyone who shares this passion. My email address is: fopsblog@gmail.com

Posted in Uncategorized. Bookmark the permalink.
A message from the stars: A for Andromeda (1961) →